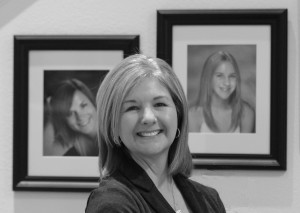 Kimberly Schlau began her speaking career after her daughters, Jessica and Kelli Uhl, were killed by a speeding Illinois State Trooper. He was driving at a reported speed of 126 miles per hour to respond to an accident scene which was already secured by first responders. He was also talking on his personal cell phone while driving at this high rate of speed when he lost control of the vehicle and crossed the median, driving into the girls’ car and killing them instantly.

In 2010, at the invitation of Chief Tim Fitch of the St. Louis County Police Department, Kim started speaking to cadets at the St. Louis Police Academy. Her presentation covers the events of the day Jessica and Kelli were killed, the subsequent investigation and the emotional toll on her and her family. She hopes that her story can impact officers on personal level, reminding them of the tragic, yet avoidable, consequences of unnecessary high-speed during pursuits and responses.

Since then, Kim has traveled across the country speaking at police academies, law enforcement conferences, and other police departments, as well as continuing to speak to several local police academies on a recurring basis. Most recently she was the keynote speaker at the South Dakota Police Chiefs’ Meeting in April 2016, and will be a featured speaker at the National FTO Conference in June 2017.

Kim also speaks to businesses and schools about the dangers of high-speed and distracted driving.

Kim has dedicated herself to talking about her daughters and the circumstances of their deaths in an effort to prevent this tragedy from happening to other families. Her story is compelling and poignant, and has been well received by thousands of officers.

To request that Kim speak at your department, business or school, you can contact her at kimberly.schlau@gmail.com, or at 618.407.2321.

You can find out more about Jessica and Kelli, and their scholarship foundation by visiting www.JessicaandKelliUhl.com.

Kim's ability to engage her audience is commendable and her awareness of the subject matter, remarkable. She is a pleasure to watch and great to work with. And I would absolutely recommend her as a guest speaker.
Don Jacquin St Louis County Police Academy
As tragic as it is that she lost her two daughters in a crash involving a police officer, Kim has found strength in sharing her story with officers in hopes that officers will take accountability for their driving. Kim is a wonderful speaker and her story can help law enforcement leaders transform their agency.
Marc Joseph Deputy Chief, Las Vegas Metropolitan Police Department
I am very, very grateful that you continue to make yourself available to law enforcement and help us make the changes. You truly are making a difference.
Dale Stockton Editor-in-Cheif, Law Enforcement Magazine